What Causes a Clogged Kitchen Sink?

A clogged kitchen sink.  For many people who grew up in the transition from normal sinks to those with in-sink garbage disposals, we suddenly believed that anything could go down the kitchen sink. And we tried.  We figured that this powerful motor could grind up anything, and we would never have a clogged kitchen sink again. We were wrong.

A clogged kitchen sink is more common by far than a clogged bathroom or utility room sink, and two things are to blame. First, the sheer volume of work that takes place in a kitchen, most of it involving food, but some of it involving art projects, gardening projects, garage projects, and other big particle rinse offs.  Second, that disposal.  People in the US in particular love to just flush anything leftover off plates or cookware down that kitchen drain and simply expect it to keep up.

And mostly, they do.  But they aren’t actually intended to, and a lot of what you rinse down that sink isn’t good for your municipal sewage system, either.

The original intent of those grinders under your sink was to grind up the tiny bits that didn’t get scraped into the trash. Not to grind up entire piles of potato peelings, carrots, mounds of egg shells, or stacks of bread crusts and uneaten salad.  Potato peelings and egg shells are particularly hard on the garbage disposal, and unpopped popcorn can stick between the blades, causing a complete stoppage.

If you want to keep your plumbing bills down, your garbage disposal replacement costs low, and your frustration to a minimum, scrape most of the waste from dinner into the trash. Or the compost pile. Or let Spot have at it. Just kidding. Table scraps aren’t good for dogs.

Just don’t flush it all down the sink. 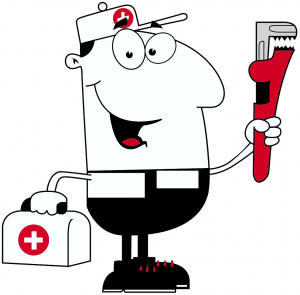